Triumph Stag V8 – Thanks for the memories

Believe it or not there are still those of us who liked cars for what they were and not necessarily what they could have been, if you get my drift. Cars today are all fairly similar in that they are run by some kind of brain, and if there is a problem a garage “technician” plugs his expensive machine into the brain and the brain then tells the nice man what to replace. In short; they don’t really build bad or unreliable cars anymore. It is also miles more difficult for your average buyer to choose one which is suitable for his/her needs mainly because so many fit the bill.

Unfortunately in the same way when you visit an Indian restaurant, the menu can have 4 to 5 pages but most of us rarely get beyond the korma or chicken tikka masala, quite simply because there is too much to choose from and we don’t want to end up with something we don’t like so we play it safe. This could probably point towards the fact that today the majority of buyers will ultimately stick with Ford, Vauxhall, Toyota and VW as they are our chicken tikka masala’s. But what about the” good old days” when cars broke down and rusted and the dilemma was you had to get them fixed but the spare parts were too expensive!

Looking back to the very late 70s and early 80s, the best car I ever drove, for a variety of reasons, was the triumph stag convertible V8. Now remember these are my memories and they are from a long time ago so I don’t want any anoraks taunting me for getting my facts wrong, as this is my memory!

I never owned this car, it belonged to a friend of mines uncle who ran a small but successful quality car operation and one day he threw us the keys, after we had done some work on his house, and said; “don’t go mad but make sure you have a good time”

It was a blazing hot day, we had cash on the hip and what we now had was an absolutely stunning, recently restored Stag V8 in the most gorgeous head turning red you’ve ever seen. The leather was black and the alloys, well they just don’t make them like that anymore. In short I would drive this car in any era to any function and I am sure the heads would turn just as much as they did that day.

Being a passenger and eyeing up the lovely college girls was probably enough for me but when it was my turn to get behind the wheel, just hearing the distinctive roar of the V8 sent me into one of those ‘if god was to take me now’ moments. I remember it being quicker than anything I had driven up to that point, not that I had a garage full of super cars admittedly but I always felt that my Fiat 126 could give anyone a run for their money!

I only drove about 20 miles but I was already in love and just the feeling of freedom and general all-round well being was intoxicating. Even when we stopped at the riverside pub for a swifty I wanted mine bought to the car, so anxious was I to use up every second of ‘my turn’.

I remember the dials being round and the speedometer being cool and cute, the needle on the rev counter moving in tandem to my right foot on the gas, and when I slipped her into overdrive by pressing a button on the gearstick my satisfaction was complete. I probably never took the Stag more than 70mph but it wasn’t about that.

I knew I would struggle, no matter what, to ever recreate that feeling in a car, and you know what I haven’t. The fact that my mates uncle probably spent more time working on it than driving it didn’t bother me either I just simply loved it and if ever a modern mass produced car makes a person feel like I did in that Stag I would love to hear about it, and then have a go myself! 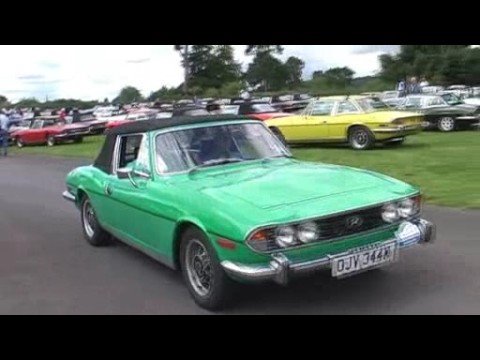 webuyanycar review – They will buy any car but beware of the asterisk
5,977 views