Another TVRelaunch on the way

Three years ago TVR closed its doors for the last time and in June 2008, Trevor Wilkinson, the company’s founder passed away, firmly bringing closure to the British marque after 64 years. Up until 2004, when Peter Wheeler had successfully carried the torch, TVR was looking good. When Wheeler sold out, Russian millionaire, Nicolay Smolenski, at just 24 years old, took control. Having been handed his father’s Russian banking group and later selling it for an estimated £80m in 2003, young Smolenski purchased TVR in 2004.

The TVR community couldn’t have asked for a more secure future which would hopefully see the British automotive institution continuing and developing over the coming years. With a new model pencilled in for production around 2006, TVR was looking strong despite being under the financial leadership from a new owner who didn’t have any automotive experience. Yet despite having the finances, Smolenski eventually mothballed the business, closing the Blackpool factory and splitting the company in two. There was to be a glimmer of hope in the summer of 2008 when TVR showed off an updated Sagaris but nothing came to fruition.

Fast-forward two years, and the TVR website is soon to be re-launched whilst our insiders claim that the company with its HQ now based in London, is on the brink of launching a brand new car at the Goodwood Festival of Speed. Rumour has it that the new car will also feature an American powered V8 engine as developing a brand new unit is too costly. Spies have also reported seeing heavily disguised TVR prototypes winter testing in Sweden. We also have it on good authority that Blackpool has been ditched in favour of Germany where the new models will be constructed. TVR is ready to make a comeback.

Let’s take a look back over the last 64 years to celebrate the revival of one the most iconic of British car makers. It all began with TVR’s founder, Trevor Wilkinson. Born in Blackpool on May 14 1923 and educated locally, he left school at the age of 14 to begin an engineering apprenticeship at a local garage. In 1946, at the age of 23, he bought a wheelwright’s business in Beverly Grove, Blackpool, renaming it Trevcar Motors the following year converting it for the purposes of selling and repairing cars. Little did he realise that his home town of Blackpool, an English sea side town perched alongside the Irish Sea, would lay the foundations for one of the UK’s most individual car makers – not only has Blackpool hosted TVR, but the Swallow Sidecar Company, forerunner of Jaguar Cars, also originated from one of the most visited towns in the UK.

In 1947 Wilkinson built his first car, a special two-seater body on an Alvis Firebird chassis for himself. Later he assembled another from scratch, using springs salvaged from a dodgem ride at a fairground, where he had taken a job repairing machinery to support his fledgling car business. As a result, Wilkinson with partner Jack Pickard started a separate company, TVR Engineering, with the intent of designing and engineering their own cars. And so the story began with the famous three consonants in Trevor’s name christening his new venture.
Out of the blue, in 1956, an American racing enthusiast asked Wilkinson to produce a special chassis for sports car racing in the United States. His prototype led to the TVR 1, later renamed Grantura in 1957, his first commercial car, which he sold either fully assembled or in kit form. 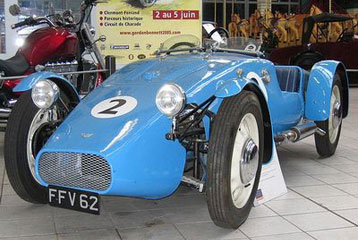 The fact that it used parts used from other cars meant it was cheaper than other sports cars, while its smooth, low nose and one-piece forward-hinged bonnet set the pattern for future TVR marques. Having produced three further versions of the Grantura, Wilkinson sold TVR engineering and over the next three years the company changed hands several times and even experienced bankruptcy twice. However, in 1965, father and son team Arthur and Martin Lilley bought the struggling car maker.

For 16 years the Lilley’s steered TVR through good times and bad and introduced several new models including the Vixen, the original Tuscan based on the Vixen and M Series. They were also responsible for a number of innovations: the UK’s first production turbo-charged car (3000M Turbo), and TVR’s first convertible, the 3000S. In 1980, they oversaw the introduction of a radical design departure when the angular Tasmin was launched at the Geneva Motor Show which would be the mainstream of company production for the next 8 years. Although TVR was run successfully, towards the end of 1980 the company nearly went bankrupt for the third time and so in late 1981 the Lilley’s decided to sell the company on again.

Having been in British hands since 1946, like the Lilley’s, new owner Peter Wheeler who took control in 1981, would steer TVR into a new direction finally giving the car maker success and recognition. It would be Wheeler who would set new boundaries and produce brawny, back-to-basics sports cars that shared the spotlight with the likes of Ferrari and Porsche.

But with a new car imminent, can its first foreign owner revive TVR’s unique heritage?

Mar 6, 2010Steve Bell
Drop top madness - it's the same every yearThe best deal is not always the cheapest

webuyanycar review – They will buy any car but beware of the asterisk
5,327 views