Bargain of the Week – Mazda 6 MPS

Q-cars: Underrated on the outside, serious performers on the inside. There’s been plenty over the years, some adored and others just getting a quick editorial line in a car magazine. This week’s BOTW is one of the latter. Mazda has’ been making great sports cars over the last twenty years yet when they released the MazdaSpeed moniker in the US back in 2005, they struck a chord with enthusiasts that the Japanese manufacturer had craved for because its rivals, Subaru and Mitsubishi, had been so successful doing similar things in the past. The STi and EVO rally-inspired cars had the market sewn up yet Mazda were about to offer the first real rival in ten years.

The first MazdaSport treatment came in the form of the ‘6 saloon with a 2.3-litre, 4cylinder turbocharged engine producing 275bhp coupled with 4-wheel-drive to make sure it had the performance and handling to be competitive.

After a very successful twelve months Mazda moved its platform to the growing market in the UK and were about to release MazdaSport to the hard-to-please British petrol heads.

The newly launched European Mazda 6 MPS (Mazda Performance Series) had the potential to match Subaru and Mitsubishi. Now boasting 280bhp the press warmed to Mazda’s new Q-car. It certainly matched its rivals in every respect (a 0-62 time of 6.2secs amongst many others) and had all the luxury equipment needed yet it was considerably more expensive than the STi and Evo, some £3,000 more in fact.

This was always going to be a careful balancing act as pricing was so crucial. Mazda made the wrong move from the start which was to be the tipping point for the 6 MPS. Whilst Mazda were busy marketing their new car, Ford’s ST and the RenaultSport range, amongst others, were already matching the MPS, STi and EVO in the power wars yet were saving potential owners over £5,000 in the showroom.

This was not only a sticking point for Mazda, but Subaru and Mitsubishi were also starting to struggle to compete. With worldwide pressure on cutting emissions the automotive industry had to change its attitude towards high performance cars and in 2007 Mazda decided to pull its 6 MPS and concentrate more on its successor, the 3 MPS. 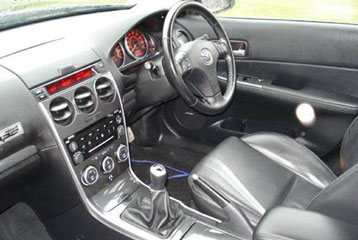 With struggling sales and updating its 2.3-litre engine to stringent emission targets, what was looking very likely as a serious rival to its Japanese neighbours, the defunct 6 MPS lasted just over a year in the UK.

Although they still demand a healthy used car value, most of the 6 MPS’ are still in the hands of their original owners as Japanese reliability and devotion stops them from ending up on the used car market.
With 280bhp, 4WD and the prowess to match, it’s no surprise that there aren’t many for sale three years on.

As far as getting hold of one they are in short supply in comparison to Subaru and Mitsubishi, but if you’re looking for something with a little more luxury on its side yet can match the STi’s and EVO’s, then the Mazda 6 MPS is definitely Bargain of The Week.

webuyanycar review – They will buy any car but beware of the asterisk
5,332 views